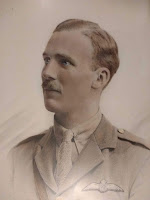 WORLD WAR 1:  Memories of St Modoc's family members
Material relating to the experience of relatives of St Modoc's congregation are arranged alphabetically below.  To enlarge image, please click on it.

Wilfred Jack Betty  lived in Taunton, Somerset and joined the Somerset Light Infantry in 1914. He survived the Battle of the Somme in 1916 and continued to serve despite being sent back to England to recover from sickness. He fought in the Battle near St Simon in France, which took place in March 1918. At one point in the War he also served in Belgium .

His Company of 40 soldiers and Officers were badly hit during the period of 21st March to 1st April 1918, to the point that under heavy enemy fire all the Officers were killed and he escaped being injured . At this time he was a Sergeant in charge of his soldiers and immediately went to check each man to see if there were any other survivors. By chance he spotted that one soldier showed signs of life . This soldier had a badly injured leg. He dragged this soldier through the battlefield to the Medical Camp for treatment.

This incident was reported to the Commanding Officer of the 20th Light Division. He was awarded the Distinguished Conduct Medal, DCM, for his gallantry. This award is the highest award that could be given to a non Commissioned Officer, second to the VC.

After the War, Wilfrid set up the family home in Park Street in Taunton. One day some years later, a family moved into the same street a few doors down from my Grandfather’s home. The father of this family had a wooden leg and one day  he answered a knock on his door, when the man announced that he was the soldier whose life he had saved and thanked him . 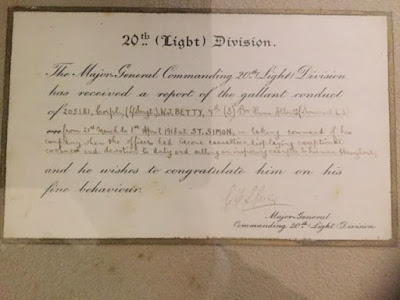 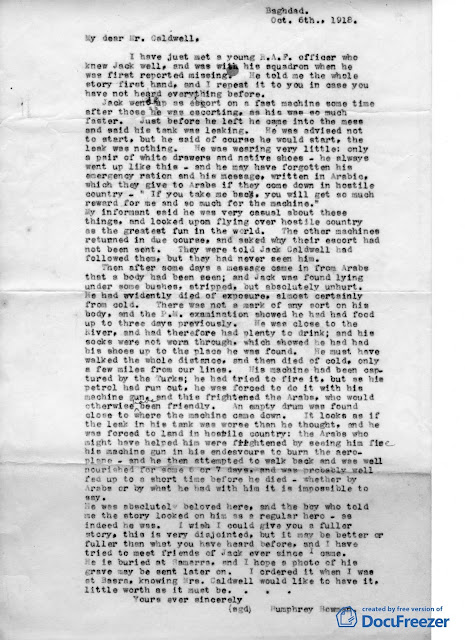 Kenneth signed up while studying as a medical student at Edinburgh University and endured three hard years as a young artillery subaltern on the Western Front. Gassed at the Battle of Passchendaele, he was invalided out. However, he was determined to return to action so signed up to train with the Royal Flying Corps, then in its infancy, learning to fly despite being sick (due to the gas) every time he was airborne. Fortunately for Kenneth the war ended before he had finished his RFC training. TAPS, an anthology subtitled  Famous Poems of the First World War includes a poem by Kenneth McCracken. Entitled The Gun Team and written in the post-war bustle of Edinburgh, where he had resumed his medical degree, it describes a momentary flashback, the imagined sight of a team of horses pulling an eighteen-pounder gun through the city. The poem is a nostalgic salute to the comradeship of the horse lines and even the romance of a type of warfare that would never return. One verse ends:

I felt my pulses bounding and my blood ran fast and free,
As down the breeze the hot horse scent came in a wave to me.
And oh my heart was longing for the gunner life again,
The poplar-shaded horse lines in the poppy-sprinkled plain.

Norman left school aged 18 and went straight to the trenches.  He was invalided out after being shot in the knee.  He wrote a diary which has been published, including these extracts: 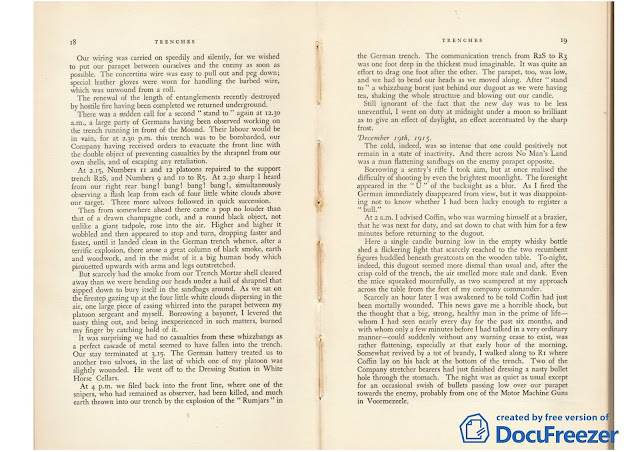 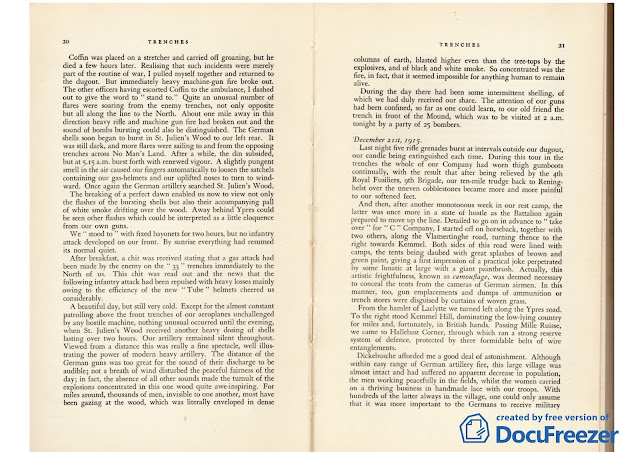 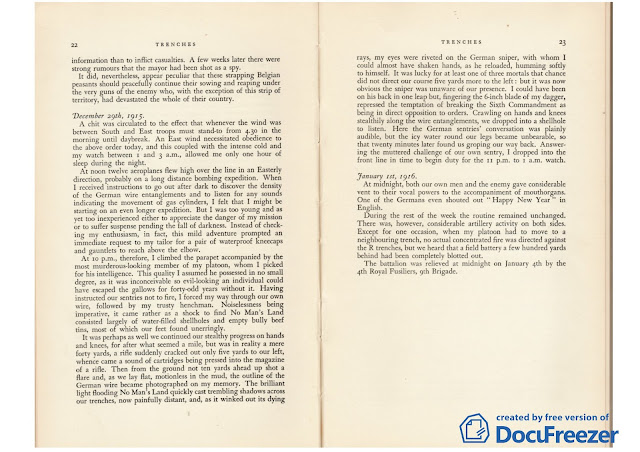 Awarded two Military Crosses, aged 19, in 1918 for gallantry in trench warfare, on the second occasion of which he was seriously wounded.

Citations:
September 11th 1918:  [Action at Aveluy Wood sector, in the frontline just south of the village of Gouzeaucourt]   He behaved with conspicuous gallantry and coolness during the intense bombardment of our trenches by the enemy, moving from post to post, encouraging the men by his fine example and complete disregard for danger.

October 8th 1918:  For great gallantry and devotion to duty during the attack at Villers-Outreux.  After his Company Commander had been seriously wounded , he assumed command, and although wounded himself, led it throughout the entire day, pressing the enemy back through the streets and gardens on the north side of the village until finally he cleared them out.  The success with which the northern portion of the village was cleared was due in very large measure to his example, initiative and pluck.

See http://www.scottishsporthistory.com/sports-history-news-and-blog/dounes-anzac-hero
for full story.  This is an excerpt from that entry:

When war broke out the call went out throughout the Empire for men to fight and he enlisted in March 1915.  Serving with the 28th Battalion of the AIF (Australian Imperial Force), he arrived at Gallipoli in September 1915 and was immediately pitched into action.    The death toll of the Anzacs (Australia and New Zealand Army Corps) at Gallipoli was appalling, but Morrison’s life was saved by illness after a few weeks of heavy conflict. His army medical record shows that he was admitted to hospital on 13 November suffering from enteritis and dysentery, and was shipped out to Malta to recover. It took three long months before he was deemed fit again for active service, and as the conflict in Turkey was coming to an end he spent a further month in Egypt before embarking for a different front line, this time in France.It was there that he took part in the first serious action by Anzac forces on the Western Front. On 6 June 1916, 73 Australian soldiers volunteered for a night raid at Armentieres. Crawling on hands and knees through no man’s land in the pitch dark, cutting their way through 40 yards of barbed wire, they waited for a pre-arranged covering barrage before jumping into the German lines. Rushing along the trenches, throwing bombs into each dugout, they killed a number of men and took several prisoners, before withdrawing. It was all over in minutes.Although two of the raiders were killed in a retaliatory barrage (including another Scot, Duncan MacLeod, born near Nairn), the raid was heralded as a success and gave a much needed boost to morale after the horrors of Gallipoli. The press seized the opportunity, dubbing the solders the ‘Black Anzacs’ as they had blackened their faces with burnt cork for camouflage. The authorities were equally keen to celebrate some good news, and as a reward, the soldiers who took part were invited to the AIF headquarters in Westminster, where they were served strawberries and cream.
While most of his battalion had to satisfy themselves with a short leave in London, Morrison took the opportunity to head north to Doune, where he was given a rapturous reception. He brought with him an Australian comrade, John McHugh (who would die of wounds the following year).  Morrison travelled home on leave again before the end of the conflict but spent most of his three years living on the front line. The places where he fought read like a catalogue of the First World War: Poizieres, Ypres, Ancre, Bapaume, Passchendale, Amiens, Somme and many others, yet when the conflict ended, astonishingly, he was virtually unscathed.  Promoted to Corporal, he suffered his only wound at Morlancourt in the summer of 1918 but remained at his post.     Demobilised in 1919, James decided not to return to Australia and came back to Doune where he assisted his elder brother William on the family farm.

My Grandfather was a Piper in the Seaforth Highlanders. He survived the 1st World War but died 4 years later, and all I was ever told was that he died of war wounds. After a lot of research, I discovered that he had shrapnel lodged in his heart. There must have been a lot of men who are not remembered as war dead because their injuries did not actually kill them at the time.  So, I also like to remember them and of course the ones with mental scars too. On a different note I was told that my Grandmother did not even receive the compensation that went to widows whose husbands died in the war. She was left with 2 young boys and very little means - so it must have been a very difficult time.

Letters exchanged between Cyril, his fanily in the village of Badsey in Worcestershire and his fiancee Mela include the following extracts. Cyril wrote to his mother when he was wounded in 1916, and she replied but died on 30th April: 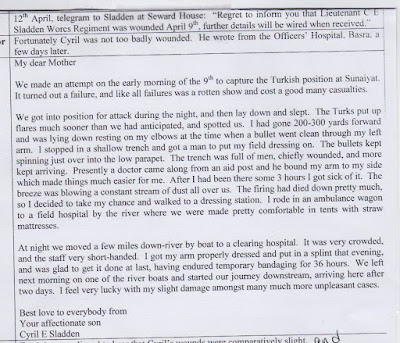 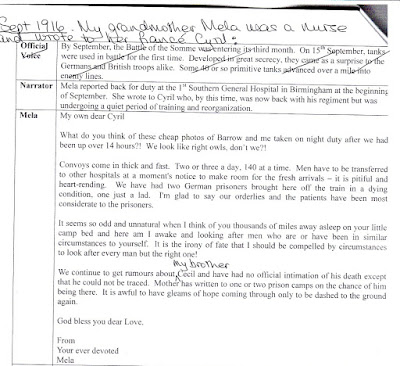 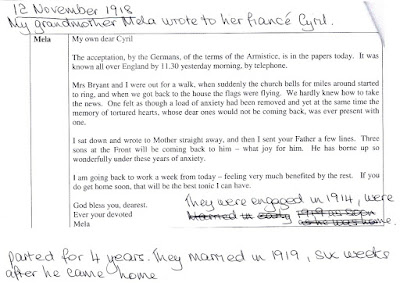